I’m part of a Facebook group called Dungeons & Dragons 5th Edition. It’s a big group with well over one hundred thousand members. A common theme I see on the group is a mindset of what is often referred to as “DM vs Player”, a false idea that the DM needs to oppose and compete with their party for the game to work. I’d like to discuss this mentality and why I feel it’s one of the more toxic mindsets, toxic enough to ruin games and groups. Specifically for this post, I want to discuss a subset of the DM vs Player mindset I like to call “Punishing the Player”. In part two I’ll talk about another subset, “Negating the Character“.

Because so many players and groups seek different parts of enjoyment from D&D, most advice depends on the play style to be effective. I don’t think that is the case with “punishing the player”. Avoid this mentality at all costs. I have never seen a game where a “DM vs Player” mentality added benefits . This mindset won’t automatically transform a game into being bad, but its inclusion will hold the game back from being a better one.

DM vs Player is described as any situation where the DM competes against the players. This may sound strange to newer players and DMs; isn’t that the DM’s job? The answer is yes…but not really. The DM’s job is to set up challenges for the player, whether they are narrative or combat. However, the DM should well and truly be on the same side as the players. When the players succeed, the DM should want to cheer! If the DM feels happier when monsters beat the PCs, even if only for one battle, it’s a good indicator this mindset is in play.

There are two broad patterns that fall into a DM vs Player mentality, as mentioned at the start. For now, let’s focus on “punishing the player” and see some common examples.

If competing with the characters is one bad pattern, then it follows being an adversary to the players is the other. An easy way to spot this pattern is to notice when players are judged for their characters actions. The DM is failing to respect the boundaries between the two.

Reacting against the player.
John, a player, wants heavy combat from games. Neither the other players nor the DM have the same interests. The DM does his best to make John’s character fail often. More enemies target John’s character, NPCs insult him, and prices for goods cost more for him. The DM is hoping John will have too little fun to keep coming back to the games. The DM is punishing the player in hopes that they will leave the game.

Punishing out-of-game actions in-game.
Amy, a DM, has a house rule asking that players not pass notes around the table to each other. She wants to hear the player’s strategy, that is the part of play she enjoys most. One player gets caught passing notes anyways. That player’s character starts having bad things happen to them on purpose because the DM is upset. Amy took her annoyance out on the player’s character as a means of punishing the player for passing notes.

Making up for in-game changes with out-of-game punishments.
Samantha, a player, is not having fun with her character. Samantha asks the DM if she can change to a new character, and the DM grudgingly allows it. But because the DM didn’t really want this new character, he always singles Samantha out when monsters attack or NPCs are looking for someone to blame. It might even be unconscious, but the end result is the DM punishing the player for an in-game change.

These examples are not an exhaustive list. What they do accomplish is start to lay out the pattern and themes of punishing the players. So, what’re the solutions?

DM with the Players, Not Against Them.

Is everyone having fun? If not, can compromises be reached? If compromises seem unattainable, someone will either need to accept that the game won’t be as fun for them, or someone will need to walk away from (or be asked to leave) the game. 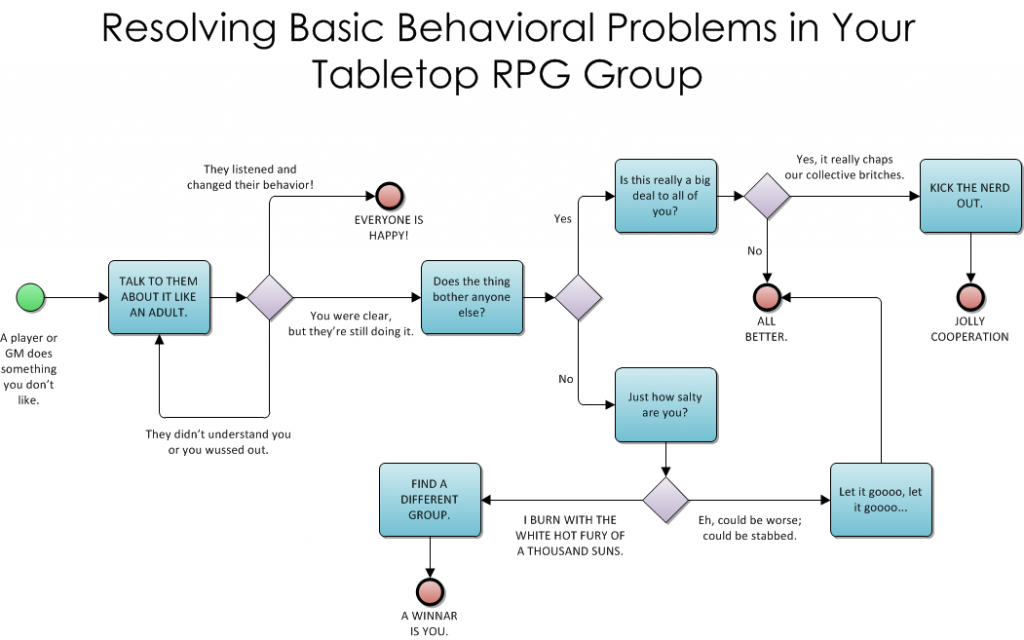 Let’s revisit our examples from above, but this time see what potential solutions could be without the use of a DM vs Player mentality.

Reacting against the player.
John, a player, wants heavy combat from games. The GM explains this isn’t really the type of game he wants to run, nor do the other players want to play in that kind of game. Would John prefer to run a different character instead of a barbarian, so he could get more enjoyment from a game less focused on combat? John agrees.

Punishing out-of-game actions in-game.
Amy, a DM, catches a player breaking some house rules by passing notes around. She waits until after the game and talks to the player. It turns out the note was something personal and not related to the game. Amy understands, but asks that the player refrain from discussing matters of a personal nature during the game.

Making up for in-game changes with out-of-game punishments.
Samantha, a player, re-rolls and changes her character. The DM starts to punish her by having bad things happen to the new character, but Samatha asks the DM if he is mad. The DM realizes he is; he then promises to stop punishing the player.

Avoid Competing with the Players

I read a perfect quote (I can’t currently find), but it was basically: “The DM should not compete with the party, even if the NPCs the DM is controlling do compete”. Just because the Big Bad Evil Guy wants to kill the entire party does not mean the DM should be rooting for that same event to happen.

Different groups will want different levels of challenge. Generally, however, the rule of thumb is to set up an event challenging to the players, but not so hard as to prevent them from succeeding. Succeeding after adversity is the hallmark of an adventurer, and what most players strive for.

If, as a DM, your monsters and NPCs overcome their party’s strengths, it should be for good reasons; they’re intelligent masterminds, they got lucky, they studied up on the party, or the players took on monsters too strong for them to reasonably overcome. All of those reasons are fine; the one you want to avoid is using hard encounters to punish players.

Wanting to challenge the players, but yet still wanting them to achieve success is a bit of a contradiction. This method of thinking is often hard to achieve for newcomers.  As they say, it’s more of an art and less of a science.

The punchline arrives before the setup.

Sick of people calling everything in crypto a Ponzi scheme. Some crypto projects are pump and dump schemes, while others are pyramid schemes. Others are just standard issue fraud. Others are just middlemen skimming of the top. Stop glossing over the diversity in the industry.

Hot take: it doesn’t matter how pretty your math rocks are, if you can’t read the numbers in your dice they’re not very good dice

Do my cats really like each other or are they excellent liars lulling me and lowering my suspicions…?

Was not what I expected.

Hey @EmpowerToday, I waited an hour and 20 minutes to talk to a “specialist” … who hung up on me because they had issues with their headset and couldn’t hear me. The first rep could hear me fine and I wasn’t muted. Absolutely horrid customer service.