I tweeted some thoughts about D&D and playing with empathy a while back, and decided the concept merited a full blog post about it. First up, let’s define empathy for the sake of this article. I’m using empathy to not just mean the fairly standard “understand someone else’s emotions and experiences”, but also to imagine putting yourself in their shoes.

Playing with empathy means you understand experiences of others. But the usage of “others” in D&D isn’t limited to the other people playing the game, these others can also be the various NPCs in the game. And sometimes a DM or player will struggle to have empathy for a given situation (usually due to lack of exposure to that situation), but that shouldn’t stop us from trying.  Let’s look at some ways we can have empathy as both a player and as a DM. 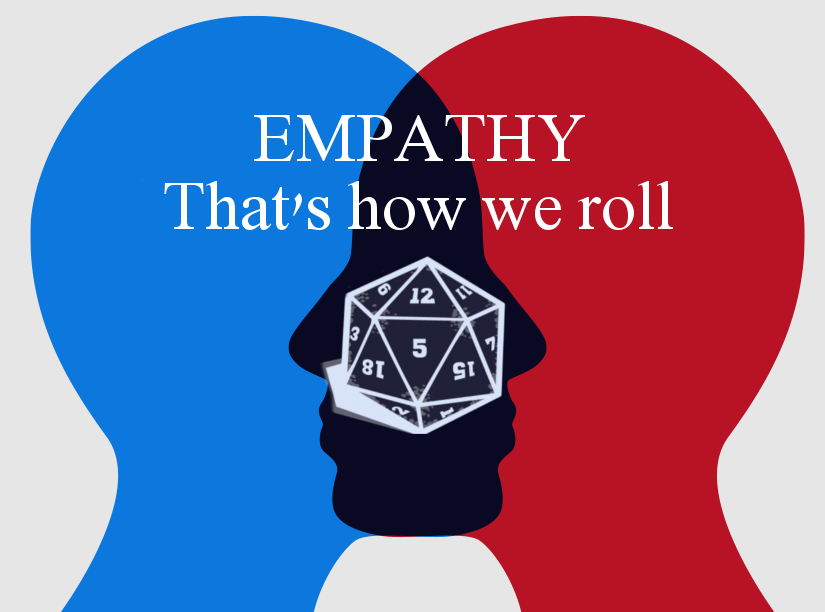 Playing With Empathy As A Player

With players, your focus for your empathy is to your character and to the other players. Depending on your group’s chemistry and roleplaying style, one may be more important than the other. If you aren’t sure, a safe bet would be leaning towards being more empathetic to your fellow players.

Playing with empathy helps you understand your own character.

To be honest, you’ve probably already been doing this even if you didn’t realize it. You’re playing the slightly dumb and far-from-wise Garm the barbarian, who’s childhood of cages and abuse causes him to go into rage whenever someone hits a woman or makes use of slaves. When you’re thinking about what Garm would do, you’re trying to understand Garm’s situation, and then proceed in-game appropriately.

What would Garm say to an innkeeper who mistreats his barmaids? You decide Garm might go too far with threatening the innkeeper. Why did you, as a player, decide this? Maybe you thought that Garm would likely get angry at the mistreatment due to his childhood environment; further, his lower intelligence and wisdom scores often express themselves in ways that lead to bad social encounters. This is exactly what empathy in RPGs is all about; understanding the emotions and situations of others, trying to put yourself in those same situations, and then making decisions based on how you feel you might proceed if you were Garm. Good empathy and some nice outside-of-the-box thinking can lead to great moments of finding the yes.

One important exception to call out here is that your empathy-led actions should adhere to Wheaton’s Law. If you think your character would do some action that would cause grievance to others characters or players, come up with another idea. It’s okay to have tension in the party among the PCs (it can make for a great story!). But by using “It’s what my character would do” as you steal from fellow PCs, hinder them in combat, plan schemes to hamper their own fun, etc., is simply not cool.

Playing with empathy helps to form closer bonds with the other players (and their characters).

Of course, the main usage of empathy is to relate to real-world people. And who better than your fellow players? Understanding your fellow players is a great first step to potentially changing the relationship from fellow gamer toward being friends. And if you’re understanding the other player, you might be able to anticipate their needs and planned actions, and set up some awesome combos between your players. Lastly, it can make it so that when their character does something that prevents a plan you had from coming to fruition, you can understand why that player had their character do what they did.

If the whole group plays with empathy, fewer arguments happen.

D&D (and all other RPGs) are no stranger to problems between players. Whether it’s breaking Wheaton’s Law, players having different expectations of the game, dissatisfaction with the game, or conflicting personalities, most every player has played a game where something went wrong.

But playing with empathy can help reduce those problems! If John wants to play a narrative- and intrigue-based game and Mary wants to focus more on combat, a DM leaning toward either way might inadvertently cause friction. Having a session zero helps with this a lot, but even outside of it empathy can help. John and Mary understanding (and appreciating) that there’s more to the game than just what they want can lead to a compromise where neither gets exactly what they want, but understand that they both get a good amount of what they like and appreciate that when they aren’t having the most fun, others at the table are. It’s a team game, after all.

Also, empathy between players can go a long ways toward problems with players hogging the spotlight. If you care about what others think because you’ve been putting yourself in their shoes, then you know waiting a long long time for your turn isn’t very cool, and will be more willing to let others players take equal enjoyment from the spotlight.

Playing With Empathy As A DM

As a DM, playing with empathy will net you many more benefits than players. You’re going to be playing more characters than any player will. You’ll also always be interacting with all players much more often. Also, quite simply, often it’s the DM who has the mic, so to speak.

Empathy lets you understand what your players want.

This came up earlier when talking about our fictitious John and Mary, and the same points apply here except from the opposite point of view. Instead of Mary and John being happy with the compromise, it’s now up to you to realize a compromise is needed, and the only way of doing that is by understanding what your players want.

There’s two ways to do this. The first is simple: ask the the players what they want, preferably during a session zero. The second is where empathy — and perception — comes into play. When your players are actively playing the game, find out what makes them happy. Do they get deep into character? Have more moments to let them shine. Are they laughing lots and clapping their hands in excitement at funny scenes? Maybe they want more of them! This likely won’t present itself as obvious in the first few sessions, but as you get to know the players (and their characters) more, this should become more apparent over time.

When two or more players argue, it’s the DM’s time to put on the referee hat. This can be a totally unfun time in the game, but empathy can mitigate it to a degree.

Just as with understanding your players, you can both ask why the players are upset and also watch them. Then go a step further and really think about it; pretend to be one upset player first, then the other, giving them each their own due.

If John is upset that Mary got two magic items in a row, find out what he’s really upset about. Is he actually upset that Mary got two magic items? Maybe he’s upset that he didn’t get any, or that he didn’t specifically get one of the two he got because either one would have helped his character out. Then find out if Mary really needs both her items; maybe it’s the random dice dealing a fickle hand, or maybe it’s just that the body Mary looted had the item on it and she happened to pocket it. Mary might not want the item, or may be unaware that John wanted it. Whatever the situation, understanding both players is the easiest way to resolve it.

Empathy helps get you into an NPC mindset.

Just as players can use empathy to figure out what makes their characters tick, a DM needs to run his NPCs the same way. This is something I often struggle with, because it so often happens in the spur of the moment. Still, playing with empathy as an NPC helps guide your choices even during an improv section.

Empathy for yourself helps you forgive mistakes you make.

Lastly, most DMs have made mistakes. Sometimes minor ones, sometimes pretty major ones. I’ve read stories on Facebook and Reddit about a DM’s poor judgement call or misunderstanding of the rules even resulting in character deaths!

One of the ways we learn, however, is from mistakes — both our own and those of others. And remembering that we all make errors is key to forgiveness. Understanding —  and empathy —  let us realize we weren’t being malicious and that we deserve forgiveness.

While different people will gain different amounts of benefits from empathy, everyone will likely gain some benefit. Along with so much other advice, it depends on the people involved.

As always, if you want to talk about the article hit me up on twitter.

Dammit, now I gotta go sing some obscure church hymn from like 28 years ago.

But also, it’s important to eat the Swiss Roll properly. First the chocolate shell layer, then you eat it by slowly unrolling it.

Regardless of what TTRPG you play, we can all come together and agree that the dice taste really good

You're the cast of the D&D movie 3 months before release and WOTC/Hasbro publish OGL 1.1

She thinks #WotC is EA, or Ubisoft, and they need to shove every bit of DLC they can down people's throats.

In truth, they're the console, not the game. The PEOPLE make the games, and if you screw with them enough, they'll find another console to run it on. #OpenDnD