A few days ago Ryan tweeted the DM’s job is to set up “scenarios players make a story of” to which the players “need to find the yes”. Finding the yes is a powerful method of framing DM/player interactions. It’s also a tool that empowers players to influence and affect the narrative of the campaign in unexpected ways. While I think the word “need” is too strong in Ryan’s tweet, I still wanted to pump my fists in the air in joy while reading it. Find the yes! That’s the attitude that has the power to transform a D&D session from average or good to unforgettable. 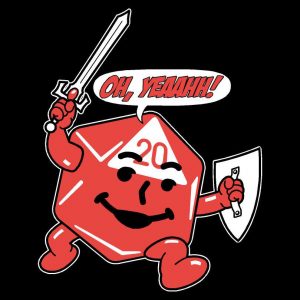 Let’s set up an example.

We’ll make up a party of an elven bard, a dwarven barbarian, a halfling cleric, and a human wizard. For the notable NPCs, there’s a human Duke and a dwarven Captain of the Guard. The local Queen sent the party to the Duke’s court to search for a spy. The Queen doesn’t trust the Duke to find the spy on his own, so he is unaware of the party’s mission.

The DM tells the players there are about a dozen diplomats, dignitaries, and others. These hangers-on and flunkies hover around the courts all day. The Duke is known to be gullible if one is willing to flatter him appropriately — which is exactly what all the hangers-on have been doing for months and years. There is also a handful of guards led by the dwarven Captain. When the Captain sees the elf in the party, she scrunches her face in distaste. She waves over another guard and talks to him for a minute before turning her dour gaze on the rest of the party. Finally, the Queen suspects one of the people in this room is the spy.

How much conflict is too much?

At first glance, this might look like the DM is setting the players up with too much conflict. The deck is partially stacked against them, isn’t it? The Captain seems predisposed to dislike them. She can easily influence the other guards and possibly the Duke, so there’s a chance many people could quickly turn against the party. If the Queen’s suspicions are correct, the spy already has the ear of the Duke. The elven bard, who was perfectly suited to be the party face, was the first character singled out by the Captain, so that may also seem like a handicap.

One thought — perhaps even a player’s first instinct — might be “this isn’t fair”. The bard’s player could feel this scenario was designed to thwart her character. But what if the player instead embraces the scenario, and “finds the yes” with the rest of the party?

Let’s help these characters in finding the yes.

What does this mean? Let’s take a situation where a player would normally ‘say no’ and try to change it. The tricky part here is that often, neither characters nor players are actually saying no; instead they are reacting to some scenario or change with a negative outlook. Instead of feeling like a character is being denied an action, a player could use this as a chance to do something out of the ordinary. Because that’s what characters are, beyond the norm of the every day commoner.

Revisiting the party described above, an example course of action that sees the characters finding the yes might be:

The elven bard realizes that trying to convince the Duke or Guard of any spying is an uphill battle. She changes tactics and regales the dignitaries with a heroic tale of the party’s adventure. She sings of how they saved a similar land some distance away. This impresses a few of the diplomats, who file this information away in case their own lands need saving. It also serves the purpose of distracting all of them, and taking their attention off of the Duke.

Meanwhile, the dwarf barbarian leaves his comfort zone to talk sociably with the Duke. The barbarian tells a crude but serviceable story about how much safer the Duke’s lands are than the barbarian’s wilderness home. He speaks softly, using a low voice to avoid being overheard by the diplomats. The rest of the party approach the Captain and seek to learn why the Captain is wary of them.

Finding the yes can lead to unexpected results.

It turns out the Captain naturally distrusts elves, so there’s not much they can do about that. But they learn their previous adventure, where they saved a merchant’s wares from some goblins, had an impact on the Captain’s family. The Captain’s husband is a merchant with fierce competition; his competition owned the wares the party the party saved. The Captain had misunderstood the situation after talking with a fellow guard and thought the party was supplying the competition, not merely doing a good dead.

The party apologies for the confusion, to which the Captain denies them and says it’s her apology to make. After that, the party’s watchful cleric, notices one diplomat acting strangely. The cleric spots this particular diplomat glancing nervously back at the barbarian, clearly worried about what is being discussed. Aha, a clue! Maybe that’s the spy…

Imagine this scenario had been more straightforward. The bard would have rolled a couple of Persuasion and Insight rolls, they would have deduced who the spy was, and then they would have been on to the next thing.

Instead, it became a tale of awesome intrigue even within the confines of a single ballroom in the Duke’s court. Taking something small and making it impactful is one of the things I love about D&D. Overcoming conflict is another. By finding the yes, the players in this fictitious example managed to do both while having fun, which is certainly the heart of D&D. No advice works well for every player or group, but it’s certainly worth giving a shot.

Have something to say about this article? Hit me up on Twitter.

Why does my sword /always/ glow?
#dnd

True Polymorph and Magnificent Mansion. I could go glamping anywhere with a mansion and look like/be whoever/whatever I want.

Time to let all my mediocre dice know what’s at stake. Rule those dice with an iron fist!

So why do I feel like I don’t have enough dnd in my life?

Basic: The party meets in a tavern.

Metal: You and a group of strangers awaken on a ship. The crew is missing, the wheel is locked in place, and it is slowly coming into a dark and unfamiliar port. There is a note pinned to the mast with a knife that reads, "Wish granted."